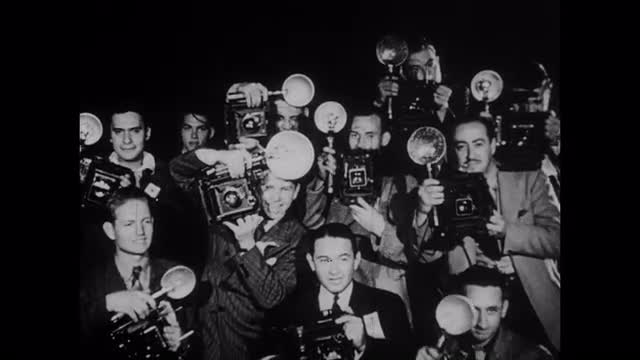 I am the self-proclaimed worst celebrity spotter in New York. How have I earned this accolade, you ask? I am in my third decade of playing the harp in restaurants in NYC where the famous dine, and I doubt I could name even 20 celebrities who have heard me perform.

My first novel, Ellen the Harpist, is celebrity-free. True, there is a name-dropping rabbi in chapter seven. And Ellen mistakenly identifies a neighbor as Dame Judi Dench. But the cast of the novel is free to move about the country without worrying about being harassed by the paparazzi.

I have no photographic evidence of having played for any celebrities. The venues where I have spent much of my career ask for discretion from their staff, which includes refraining from taking photos or asking for autographs. Thanks to my oblivion, I think discretion comes a little too easily to me.

While I take an indiscreet moment to name all of the famous people I have serenaded, I will set some ground rules as to who I can include in my list. Celebrities with whom I have shared the stage do not count because I knew I’d see them on the gig. Same goes for celebrities who hired me to perform at their events. I’m also not going to include Heads of State and other elected or appointed officials because they aren’t celebrities. Let the games begin.

I didn’t think I possessed the gift of celebrity blindness when I began working in New York. I had a certain talent for spotting Paul Shaffer. I must have randomly clocked him on the streets in Midtown two or three times before he became the first celebrity to hear me (or the first one I noticed) on a gig in my early days of playing background music. He and Anton Fig came to dinner at The Terrace Restaurant (now called the Terrace in the Sky). They approached me immediately upon spotting me behind my harp, came back to visit during the dinner, and said goodbye with a tip.

My harp and I met Jenna Fischer while waiting for an elevator at the Ritz Carlton on Central Park South. Riffraff like harpists are generally prohibited from riding guest elevators, but the owner of the hotel had hired me to play his wedding, and he elevated me to guest status to accommodate my moves between ceremony and reception. But we were talking about Jenna Fischer, weren’t we?

She arrived at the elevator first, and I stopped well short of the elevator to give her private access. Her arm was in a cast. When she recognized my polite intentions, she not only invited me to share her elevator ride but also held the door and pressed my floor button with her one good arm. Although I didn’t play for Ms. Fischer, I was on the clock and accompanied by my harp when we met, so she counts. Additionally, I am dorky enough that when my harp and I are not alone in an elevator, I generally offer to provide the elevator music. I can’t guarantee I didn’t promise her a chorus or two of Moon River during our ride.

I used to play during lunch in the Palm Court of the Plaza Hotel. The room is large, and lunch typically attracted a bustling crowd of diners. I would look out at the mass of humanity and smile at regular intervals from my perch on a stage at the back of the room, but I rarely noticed specific faces unless the guests came to talk to me. I knew Jackie Mason was in the house after he laughed while seated at his table deep inside the room.

Wrong Night to Play for a Celebrity

My first steady gig was in the Dining Room of the Hilton at Short Hills. One night, a man who had indulged copiously in the offerings of both chef and sommelier needed to hold onto the column of my harp to steady himself as he left the room. No matter that I was using the other end of it at the time. Earlier in the evening, to accommodate his indulgences, he had loosened his belt and unbuttoned his pants. The jolt from his stumble set his pants on a downward trajectory, causing him to moon the guests at the next table who happened to be Greg Norman, his wife, and their young daughter.It's never a good idea to moon a celebrity. Click To Tweet

First Selfie Before There Were Selfies

P Diddy throws himself a lavish birthday party every year. I had the honor of serenading guests at the end of the red carpet just outside of the doors into the venue at one of his parties. My harp pal, Florence, was next to me on one side of the carpet, and our other harp pal, Keith, was opposite us.

Tony Danza was so taken with our musical magnificence, he stood between Florence and me and took our picture. The next day, he shared the picture with his audience on his talk show.

This event solidified my status as a terrible celebrity spotter. Florence called out names of famous guests to me as they walked the red carpet, but the only person I identified on my own was Anna Wintour. I also learned spotting celebrities does not guarantee I’ll remember them because as far as my memories go, Tony and Anna were the only two celebrities to attend the party.

My celebrity blindness and amnesia reached full bloom about ten years ago. Between my  unique observational abilities and my recollection of the event, Barbara Walters was the only famous guest in attendance at Sumner Redstone’s wedding ceremony. There was that time a WWE wrestler (Randy Savage? I can’t remember) had lunch at the Plaza. And one day a rock star (maybe Ric Ocasek?) walked behind me on his way to the King Cole Bar at the St. Regis while I played for tea.

I have one celebrity fan at the St. Regis — Dr. Perricone, dermatologist and infomercial channel denizen. He genuinely loves harp music, always requests that I play “something nice” for him, tips generously, and occasionally gives me gifts, as well (Think Easter Bunny cookies, not product samples.)

Running into Stephen Colbert while shopping in Montclair doesn’t count because I wasn’t playing, or even moving, my harp. But Dermot Mulroney eating tea solo at the table next to me while I played at the Ritz Carlton does.

As does Sarah Ferguson, the Duchess of York who was a gracious guest one day while I played brunch at the Rainbow Room.

So what am I up to now, 13? I’m stumped. Oh, wait — I’ve got one more. Dr. Cornell West enjoyed my rendition of a piece I call 46 Strings as he settled his bill following lunch at the St. Regis, but he didn’t stick around to hear what I could do with my freshly tuned harp.

When it comes down to it, if I’m the one exercising her creative talents while these famous folks sate their appetites, maybe I’m the one deserving of a moment in front of the paparazzi. Until the tables are turned, I think I may have something to offer besides my harp stylings to famous people seeking anonymity when they dine in public. Follow me, and I guarantee discretion, however unintentional as it may be.

Celebrities aren’t the only ones who get all the good freebies! Get your free copy of King & Queen of the Bouncy Castle when you subscribe to my mailing list.

One thought on “14 Celebrities Know I Play the Harp”