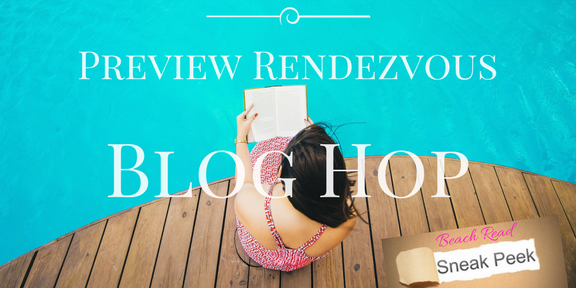 Congratulations to Andrea S! She won a Kindle edition of Ellen the Harpist and a $10 Amazon gift card during the giveaway I ran during the blog hop (giveaway ended June 7, 2017).

Welcome! I’m so excited to share my Preview Rendezvous post with you! What exactly is a preview rendezvous blog hop? I am one of six chick lit and romantic comedy authors offering our readers a sneak peek at some exclusive content. After you’ve read my blog post, hop on over to read the next author’s blog.

For my post, I’m taking you inside my work-in-progress, Ellen at Sea, the second book of the Ellen the Harpist series. Not only are the following passages from my novel (to be released January 2018) unavailable anywhere else, even when I publish the book, the official preview won’t include what I’m about to share with you. How exclusive is that? Happy reading!

Excerpt #1: In which Ellen and her bff Chloe prepare to spend the next four months working aboard a cruise ship.

“This is where we turn, Ellen.” Chloe leaned to her left, her pointed finger obscuring my view of the road.

“I know. 55th Street dead-ends at the West Side Highway. Could you move your arm? Oh, look! It’s a sign for the ship terminal.” My mood bounced from annoyed to exhilarated. Despite my misgivings about leaving home and the prospect of being out of touch with Josh, part of me had adopted Chloe’s upbeat perspective in anticipation of the cruise.

“And there’s the ship again!” Gwen held onto the back of Chloe’s seat with her left hand. Her right hand, thrusting toward the passenger window, collided with Chloe’s head. After first spotting the ship across the Hudson River from the Lincoln Tunnel helix, I had settled into a state of jittery eagerness. Chloe and I were going to be on the Orpheus in a matter of minutes, and in just over forty-eight hours, we would trade the overcast skies and thirty-degree temperature in New York for balmy Florida weather.

Minerva the minivan responded to the siren call of the mother ship, steering easily into the right lane and up the ramp. Black paint spelled out the number 88 on a field of yellow on each of the concrete pillars in front of a set of sliding glass doors. I texted the number Evan had given me to let someone on the ship know we had arrived.

Jenni had warned Chloe about the limited storage space in the cabins, but Chloe doesn’t travel light. And she taught me how to pack, as evidenced by the mountain of luggage and instruments growing on the sidewalk next to my minivan. My new soft-sided suitcases stood like homely cousins next to Chloe’s trio of silver cases. Handing her carry on to Gwen, my hand brushed against its surface. Textured like woven fabric, the plastic shell was cold, almost metallic against my fingertips.

I flung my garment bag over the dip in the curve of my harp’s neck and straddled my bench atop the bag. The singsong squeak of the wheels of a porter’s cart grew ominously louder. I took a step backward, not trusting the neon green jacket-clad man who guided the cart toward us not to ding my shins with it. He maneuvered it next to our heap of luggage. “Can I help you with these?”

“Um, we’re new crew members. Someone is meeting us. We’re good.” Searching in vain for our contact person, my eyes drifted to the right of the doorway. The Orpheus hunkered down behind the plate glass windows of the terminal like a critter in a zoo. Shivering, I walked toward the window to gaze at her. Her nose—all ships are female, I’ve learned, even when they have a male name—pointed up with a graceful tilt, beckoning us through the glass. She loomed over the terminal. Below her gleaming white body, a thin strip of navy blue paint met the gray-green water. Randomly placed rectangles broke the smooth surface of her prow. At the point where the curve of her nose straightened into the side, she bore her name. Green branches of laurel leaves framed a golden lyre underneath the lettering. While lyres and harps are two different types of instruments, I knew my harp and I belonged here.

Once emptied of her cargo, Minerva occupied valuable real estate we no longer needed in front of the terminal. I handed my keys to Gwen. “Well, unless you want to Thelma and Louise this thing and drive onto the ship, I think this is where we part.”

“Don’t think I haven’t imagined a billion ways to stow myself inside one of your suitcases. I could schedule all of my rehearsals and performances to coincide with shore leave on Sundays, right?”

Chloe snapped her pocketbook shut. “I wish! We’ll still see each other every week if we want. We can go home to Montclair or you can come into the City. Oh, don’t forget to water the plants. I’ve left specific instructions on the watering schedule and how much to give each one. All of our mail is still going to our apartment. Keep an eye out for anything we should get right away. And…”

“We’re having a nice goodbye here. Don’t go all Chloe with your lists and instructions.” I gave Gwen one last squeeze. “I’m going to miss you so much!”

Our goodbyes complete, she rounded the front of the van. Once inside, she called out through the open window of the driver’s side, “Ahoy, mateys!” We watched Minerva pull into the exit lane, heading home without us.

Excerpt #2: In Which Ellen Comes Home to an Intruder. In Her Bed.

Ping! My middle C string snapped, startling the passenger taking a picture of my harp and me. Apologizing to my new fan, I ended my set a few minutes early to head back to my cabin to grab a new string.

With my toe propping the door open, I reached inside for the light switch. Before my fingers found their target, my eyes perceived not the soul-swallowing darkness of a lightless sky of a cloudy night at sea but a gentle glow coming from the fixture above the vanity mirror. Nicolette must have left the light on.

The chair in front of the vanity took on a new role: coat hanger. Draped across the chair’s back was a tuxedo jacket. The shoulders on the jacket drooped, unsupported by a chair whose back was not as broad as the person to whom the jacket belonged.

This couldn’t have been my cabin steward’s coat, discarded before he retraced his steps with another swipe of his bleach-soaked sponge. Coldness crept under my skin. My stomach ascended into my throat. A couple further down the hallway shared a private laugh, oblivious to my plight. The gentleman held his stateroom keycard in the hand he rested on the woman’s shoulder. Involving two guests in my drama was no better a solution than confronting a possible attacker on my own.

I announced myself to the intruder. “You do not belong here. This is my cabin. I will fight you if I have to. If you leave now, I won’t report you to the Captain.” My stern voice was steadier than my nerves.

“Ellen, it’s me. I’ve been waiting for you,” spoke the familiar voice. I gasped, forgetting to exhale the air trapped in my lungs. Using the door as a shield, my knuckles white from my death grip on the handle, I peered around it to look at the man who spoke to me. A folded pair of black dress pants lay atop of the vanity. The white shirt and balled-up socks next to the pants had not received the same attentive treatment. My eyes scanned from the vanity to Chloe/Nicolette’s bed, finally landing on mine. Mr. Intruder leaned back against the pillows, demurely clutching the bedding to his chest. Bare shoulders rose above the sheets. His grin made me wonder if everything else was equally bare.

I couldn’t believe he was here. The shock of seeing him in my bed overwhelmed me. My hands began to ache from my grip on the door. Easing the tension, I considered the possibilities. The full cast of a production show plus Nessa and who knows who else couldn’t all be wrong when they chose to hop into bed with Dan. Unable to turn away, I stared at him in the same manner in which he ogles women wearing short dresses. No! I can’t think about sleeping with Dan!

Chloe was wrong when she said he had no interest in me. Had I somehow led him to believe I wanted him to break into my cabin, to wait naked for me in my bed? And why is he here now? He knows I have a short break at 7:30. He sucks at selling his talents if he believes fifteen minutes is enough time to enjoy the activity promised by his lascivious smirk.

Why would I even consider this could happen? Stasis may not be a real relationship status, but jumping into bed with another man the week after I told Josh not to call me would definitely be an act of infidelity. I had to get Dan out of my bed before he—or I—got the wrong idea.

I can’t wait to share the completed novel with you. Until then, please visit these authors’ blogs for more sneak peeks: