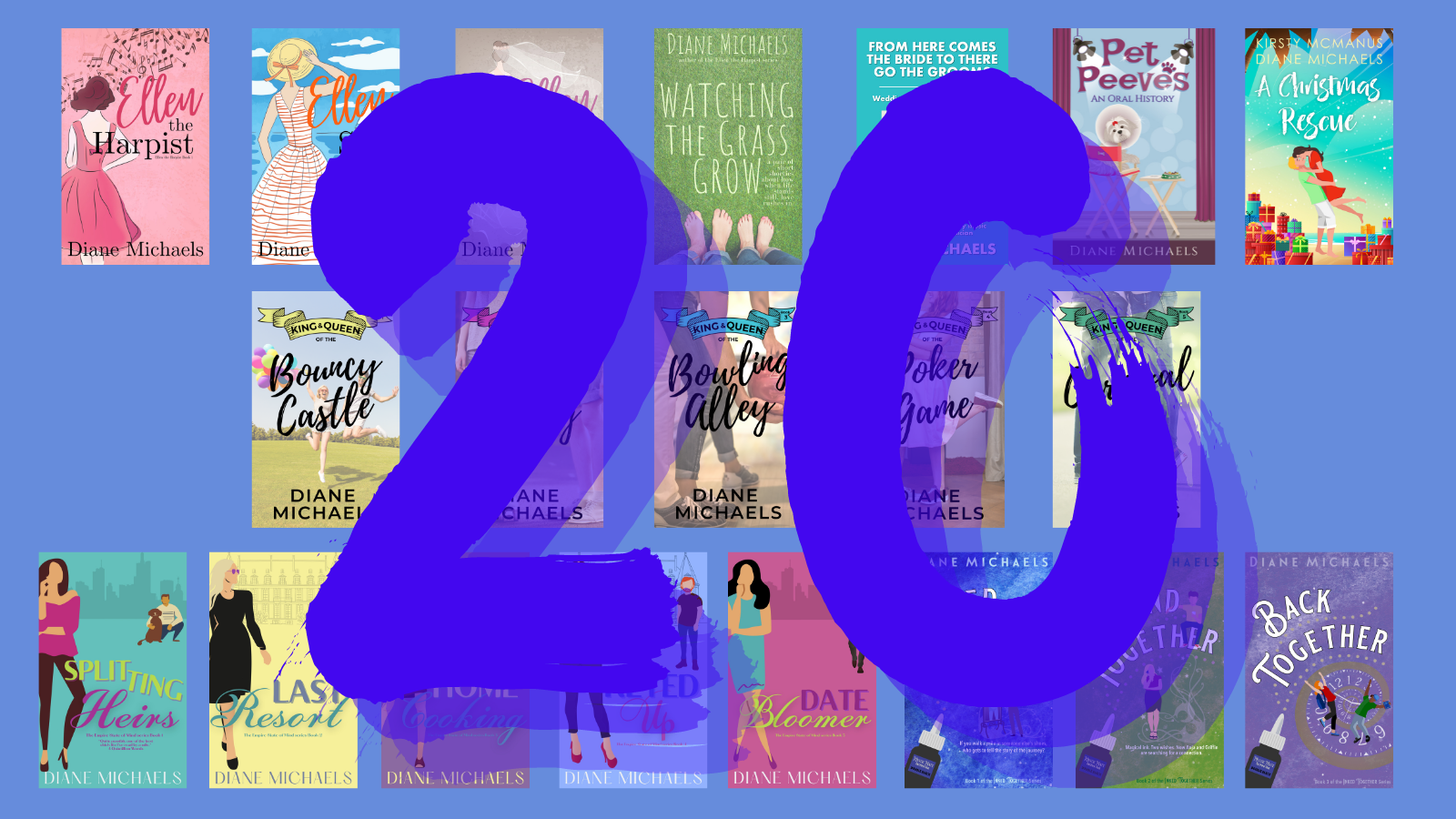 I can’t remember how young I was when I had my ‘I could write a book’ epiphany, but about 20 years ago, I began organizing my thoughts to find what sort of book I wanted to write. In early 2013, the outline of a novel took shape, and I published it in 2016.

While I had developed ideas for 2 more titles in the series as I wrote the first draft of book 1, I never expected to reach the milestone I celebrated on November 9, 2021: publishing my 20th book.

I read somewhere that 81% of Americans believe they have a book in them. The percentage of people who actually write and publish their books, however, is a whole other number [read: much smaller].

I’m shaking my head in disbelief. I mean, it’s nuts that this harpist got sucked into the authoring business, right? Being a functionally unemployed harpist for the first 18 months of the pandemic certainly played a significant role in the high volume of books I’ve published since June 2020, but the writing habit was well established before the plague arrived.

My publishing career began with the Ellen the Harpist series, three novels I published between June 2016 and June 2018. Write what you know, they said. And boy, did I take them literally. Well, almost.

Sure, Ellen and I share a career. And I inflict many of the gig mishaps (see: peeing horses, never-ending processionals, and a leaking toilet-related delay during a wedding ceremony) that I’ve endured upon my frazzled heroine. But I swear this series is not autobiographical.

Ellen is her own person, finding her way out of an awkward, adulting-is-hard place in her life in Ellen the Harpist. She gives us ample opportunities to laugh with (and at her) and maybe shed a tear or two along the way. The series continues with Ellen at Sea, which chronicles her adventures aboard a cruise ship while maintaining a long-distance relationship, and it finishes with wedding bells in Ellen the Bride.

One night in the spring of 2018, while I was in that blissful half-asleep zone just after turning out the light, another lightbulb flickered, this one in my imagination. Conveniently, I had a pad and pencil on my nightstand, so I jotted down my book idea and went back to sleep. Being able to read my writing the next morning was miraculous enough. That the idea made sense and still amused me lit the fire to write the book.

The idea that jolted me awake came after I had read oral histories of punk music and The Daily Show. The books left me with a question. If oral histories were the written, non-fiction equivalents of documentaries, what was the fictional book equivalent of a mockumentary in the spirit of The Office or This Is Spinal Tap?

Only one way to find out: by writing one. Pet Peeves fell out of my brain and into my laptop in a zippy 6 weeks. The book features 40+ characters telling their version of the history of the making of a sitcom, often unreliably. The more ridiculous they appear, the better! And, like my other books, it ends with a kiss.

A year and a half passed between the release of my first two novels. Until I finished writing, editing, and preparing Ellen at Sea for publication, Ellen the Harpist was going to while away nineteen lonely months on the bookshelf. Enter the idea of publishing shorter works in the interim.

First up was From Here Comes the Bride to There Go the Grooms. Since wedding ceremonies were a very familiar topic for me (and Ellen), I (and Ellen, along with her best friend Chloe) wrote a guide to help engaged couples plan the music for their wedding ceremonies.

And then I had to serve jury duty. It wasn’t a total waste of time because I hatched the plot for a short story about jury duty titled Watching the Grass Grow. A little on the nose, right? I wrote a second short story - Downtown Dough Nuts, about a subway delay that leads to a romantic connection - and published them as Watching the Grass Grow, which is available for free on several online book marketplaces.

By January 2019, I had published four novels and two short books. I preferred writing, editing, and publishing one book before tackling the next. But I couldn’t help but be intrigued by the concept of rapid releasing, in which an author would write one book, edit another, and prepare a third for publication simultaneously.

Writing my way through a pandemic

Like the genesis of Pet Peeves, the concept for Splitting Heirs exploded in my mind in a burst of light in the fall of 2019. This book, too, was easier to write than most of my other titles.

My father had introduced me to the movie It’s a Mad, Mad, Mad, Mad World when I was a kid. Some elements of the plot (people bumbling through a quest and elbowing their competitors out of the way only to fail in the end) plus a little of its slapstick humor found their way into my new novel’s outline.

In the author’s note in Splitting Heirs, I give the behind-the-scenes tale of losing my father after I had written the first two chapters and then having to edit the book at the start of the pandemic. No need to go further here.

Splitting Heirs and the rest of the Empire State of Mind series got me through a heck of a lot of mayhem in 2020 and 2021. Originally, I had planned to write only 3 books, but I wasn’t ready to say goodbye to the world I had created, and the series expanded into five books.

I’m pretty good at sitting alone in a room; decades of practicing the harp have trained me well for the solitary state of being a writer. Perhaps because we spend so much time hiding alone in our writers’ caves, authors seek each other out online. I have connected to so many new friends through author groups on social media.

Top amongst those is Kirsty McManus. She and I have beta read for each other for several years. I love her writing style and POV. And we share a pool of readers who like our writing for similar reasons. I don’t remember which of us first thought of co-writing a book, but we talked about it in 2019 and found time in our schedules to write our novel in August 2020.

We live on opposite sides of the globe, me on the East Coast of the US and her on the Gold Coast of Australia. You’d think that would make collaborating difficult. It turned out to be the secret to writing a book in record time. We completed the first draft to A Christmas Rescue in just over 3 weeks. She’d write a chapter while I slept and I’d write another before she woke up the next day.

I owe her a debt of gratitude for being an amazing collaborator, sounding board, and friend!

My husband and I made a tattoo pact about 20 years ago, shortly after we shared our wedding vows. We both dreamed of getting tattooed, but as performers, we knew presenting a specific image was important and that some of our clients skewed conservative. Fine. We decided we’d celebrate retirement, whenever that came, with our first tattoos.

But that didn’t stop us from thinking about them. I had designed a logo for my publishing business in 2016. After constantly staring at the logo while I was marketing Ellen the Harpist in its early days, I realized it would make a great tattoo. And thus was born an additional clause to our tattoo pact: we’d get our first tattoos based on whichever came first, retirement or me launching a book into a best-seller list on Amazon.

Long story short, I hit a list for the first time in January 2018 and got my first tattoo that May. My husband is up to two tattoos now, and I’m looking forward to adding a second.

But I’m babbling on about my personal story rather than about my books. I released novels 18, 19, and 20 in the second half of 2021. The Inked Together series is about three friends who make a pact to improve their lives. Tattoos done with magical ink become the catalyst for change, not to mention the path to three HEAs.

Planning for the next 20 books

I began my author career following the adage, “Write what you know.” It’s easy to make the direct connection between Diane the Harpist and Ellen the Harpist, but the fact that my first book was a chick lit novel might be the clearer connection.

I devoured Bridget Jones’s Diary when it came out and have been reading chick lit ever since. Critics have battered and bruised the genre, but I think they miss its value. Where romantic comedy puts romance as the primary plot, chick lit puts the interior journey ahead of the romance and then adds in snarky humor. To me, chick lit novels are like sitcoms with a bit of a message about being human, all wrapped up with an HEA. What’s not to love about them?

And now I have written 20 books, all but 2 of which fall into the chick lit genre. And it has been a blast! I see more titles coming in the future. Until then, thanks for joining me as I revisited my 20 books. Happy reading!